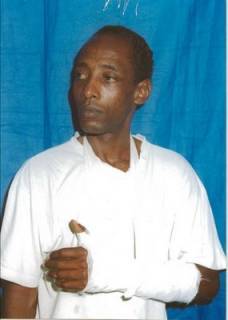 Freedom fighter Stefania has posted a interview with Maxìmo Josè Garcìa. He is a member member of the opposition Cuban Liberal Movement. Click here for the interview:

Maxìmo Josè Garcìa is a member of the opposition Cuban Liberal Movement, which fights for peaceful regime change in Cuba. He has several times been attacked by the state security and one of these times he was even beaten up. The following interview has been translated from Spanish.

1) Hi, Maximo. First of all ,thanks for allowing me this interview.

Thank you for worrying about the situation many in this part of the world live under. Especially, the Cuban situation. Cuba's people has been suffering for the last 47 years under Castro-communism, which turned Cuba into one of the poorest countries in the world.

2) When did you join the opposition? Tell us when and why.

It was when I decided to expose the lies of the political police about the inundation of the 13th of March raft. The tragedy took place on July 13, 2004; it was an horrific crime , in which some 41 people died , among which were 10 children.
I work as ship's engineer. I had helped build the wooden raft. After the tragedy, the political police came at the place where I work and told us that the incident was caused by the way the boat was built. I did not buy this lie and I started telling the truth and denouncing the crime. Because of that, the regime has been persecuting me and I lost my job. I was beaten up and humiliated for thinking differently than them, opposing their crimes and lies and denouncing the violations of human rights in my country.

3) What is the Cuban Liberal Movement and what principles it is based on?

The Cuban Liberal Movement is a peaceful dissident movement defending human rights. It was founded in 2002. Its principles are based on the ideals promoted by John Locke and other liberal thinkers.
One of our goals is to raise awareness about the liberals' Manifesto signed in Oxford in 1997 and the liberal agenda of the past century.
Also, we denounce the persistent violation of the universal declaration of Human Rights by the Castro-communist tyranny that oppresses the Cuban people since 47 years.

4) Castro claims that health and education in Cuba are free. Is that true? What is your take on the so-called U.S. embargo?

Health and education is not free. One has to pay to buy the primary goods that are very costly. The schoolchildren are forced to work in the mountains without getting paid. The embargo is an excuse Castro uses to justify the failure of his revolution.
I am convinced that even without the embargo, the situation in Cuba would remain the same.

5) How does the Cuban people see the opposition on one side and the regime on the other?

Part of the people support the opposition movements, just because they also suffer under the current regime. Day by day, the Cuban people is realizing the lies behind the Castroite propaganda.
After the death of Castro, it will start the transition, but we'll have to help it, so to let people elect e truly-democratic president.

6) Which kind of political system do you prefer, if you do have one?

We want a gov't that respects human rights; a system that allows people to freely elect their own rulers, that allows the free flow of opinions and the existance of political parties. A system whose rulers worry for the needs of the people and adopts a policy capable to help develop the country and get it out of the current misery we're living under.

7) Are you being persecuted for your opposition activity?

Yes, I'm. Above all, we're often intercepted by the political police when we're on our way to the U.S. Interests Section in Havana. They wanna know what we see in the Internet, in order to better discredite us in front of the people.

8) Maximo, Thanks for allowing us this interview. God Bless you and all your comrades. We wish you the best in your sacred fight against tyranny.

I thank you especially for giving me the opportunity to tell the world about the reality of Cuba's daily life. God Bless you.

Maximo is a very good friend of mine. this guy is a awesome human being I am glad our path crossed.