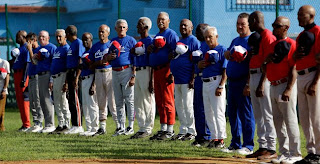 this story  has been circulating for several days on how some fogie senior softball team from Eastern Massachusetts was in Cuba to play against the Cuban old timers. The EMASS team has been traveling to Cuba for the last several years to play in this "feel good" softball games. Well...."feel Good" games...not exactly....Michael Eizenburg, the organizer of this softball tournament, is  "president of Educational Travel Alliance, a company based in Wellesley, Mass., which he started in 1998 largely to make arrangements for Americans — scholars, performers, foundation workers and the like — to travel to Cuba"

Somehow by playing softball this will magically solve the issues between the U.S. and Cuba (Just like the Juanes concert did?). Look I have no problems with these guys going to Cuba to play softball and I was going to ignore this story, but something inside of me did not feel right. From past history most of these “cultural exchanges” usually turn out to be a propaganda victory for the dictatorship.


You see many of us have family members who have died never to return to their homeland after having their homes and businesses confiscated, many of us have had family members thrown in jail as political prisoners, tortured, or executed and many have died after leaving on rafts from the so called tropical paradise. This is NEVER mentioned during these “cultural exchanges.?”

I have an idea for Mr. Michael Eizenberg, why don’t you go to south Florida and play some Cuban exile ole timers in softball(better bring you’re A game) and listen to their experiences!
Posted by Alfredo at 5:09 AM