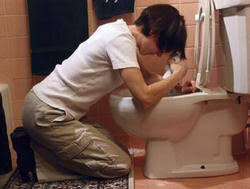 WARNING.....Be careful reading this article because it could do serious damage to your stomach!

Ok got your barf bag? The article starts out:

"There was a time when his neighbors celebrated the support Abelardo Arteaga gave to the Cuba of the Castro brothers. Fifty-five years ago this Jan. 1, Cubans in Ybor City and West Tampa danced in the street when the Cuban revolution declared victory.

Much has changed since that day in 1959. Cuba embraced Communism. The Soviet Union fell. Fidel Castro relinquished power to his brother Raul. Eleven U.S. presidents tilted against the Castros. Today, Congress debates what to do next with Cuba.

Yet through it all, Arteaga, a Tampa native, has never wavered in his support of the island nation.


At 91, Arteaga is the elder statesman among those in Tampa who would eliminate the trade and travel embargo imposed by the U.S. He has challenged it from the beginning. He has sparred with those who note that the revolution brought its own oppression, against people who speak in opposition."


So only those who oppose the embargo are considered "ELDERLY STATESMAN" and the only true supporters of Cuba?

"Arteaga has donated food, clothing and medical supplies. He purchased a bus with a wheelchair for a retirement home in Cuba.

His efforts have drawn attention.

Cuba honored Arteaga in 2007 at its Cuban Interests Section in Washington, D.C., with an honorary citizenship, complete with a Cuban passport to make travel easier. "


so over a million in exile and the grand majority of the exiles have sent money and other items to family members in Cuba....yet in this article Mr. arteaga is seen as Saint Nick?


Mr. Arteaga was honored by the Castro dictatorship in 2007 and given honorary Citizenship???? So are YOU with the dicatatorship???


"Some pro-embargo activists have challenged Arteaga over the years. The interior of his home has been splashed with red paint. He has been called names. He even left the U.S. temporarily and sought refuge in Cuba.

But he said those who have sought to silence him have failed.

“I’m not a bad person,” he says, “I only want to help Cuba. I do it peacefully. I have never hurt anyone.”


Here in the U.S. we have the FREEDOM to have different points of view and "CHALLENGE" your views about Cuba..........NO I DON'T CONDONE WHAT THEY DID YOUR HOME!.......Now do you Mr. Arteaga CONDONE all the atrocities committed against the Cuban people(murder, imprisonment, lack of FREEDOM, NO FREE ELECTIONS) by the Cuban dictatorship?

"His father was also part of Tampa’s original band of Cuban freedom fighters.

Thomas Arteaga saw Cuba’s famed poet and revolutionary leader Jose Marti during his visits to Tampa, heard his voice, and was inspired by his message that Cubans around the world needed to unite to overthrow their nation’s colonial ruler, Spain.

Arteaga has heard whispers that his father fought briefly in the Cuban War of Independence, but he has no proof. He is certain his father supported the war in other ways. He donated a share of his weekly cigar-roller earnings to Marti, as did many Tampa Cubans in those days — and he built homemade bombs for the war."


I see only that Mr. arteaga's father SAW Jose Marti and only those with links to the TAMPA CUBANS are the ONLY original FREEDOM fighters...


"Deposed President Fulgencio Batista was a vicious tyrant, Arteaga said, and Castro reminded many Cubans of Marti. During the revolution, Castro promised to return Cuba to its people."


Everybody in Tampa supported Fidel Castro and the revolution in the early years,” said USF’s Barrios. “Then the revolution turned socialist and the opinions of a lot of people abandoned that position. There was a lot of repression and silencing of those who directly supported the Revolution. The Arteaga family was unfortunately one of them.”

Arteaga said he did not feel safe, so in 1961 relocated to Cuba.

His wife and daughters remained in Tampa, but were supposed to follow soon after. He was hired as an upholsterer at a hotel in Havana. He purchased a plot of land on which to build a home. But after a few months he had second thoughts. He loved Cuba and wanted to support it, but he thought it would be too difficult for his children to adjust to an alien nation still searching for stability under a new government.


Mr. Arteaga,  about the time you relocated to Cuba in 1961, thousands of Cubans were executed, imprisoned, and businesses taken away......do you call that repression?


He has one wish left.

“To see the embargo lifted,” he said. “I don’t know if it will happen, but it should. It’s not right.”

To see the embargo lifted...you do not wish FREEDOM for Cuba? So are you a CASTRO supporter or NOT?  Embargo, smargo, Cuba can trade with every other country in the world EXCEPT the US(well not really....the US trades with Cuba in the millions) and why can't Cuba produce for it's own people.....A TROPICAL ISLAND!!!!!!