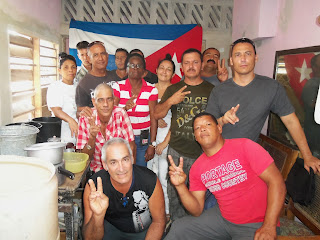 The Council of Human Rights Rapporteurs in Cuba sends an urgent worldwide appeal to the international press, Christian Churches, to all NGOs and entities as well as individuals that defend human rights regarding the detailed written information they received from the Cuban independent journalist in prison Yoenis Guerra Garcia who, under the orders of prison military officials, was drugged and subjected to violent sexual torture on November 15, 2013 at the Nieves Morejon Prison in the central Cuban province of Sancti Spiritu.
Photos of Yoenis Guerra Garcia and the written account (in Spanish) of the cruel and degrading treatment that the Cuban independent journalist suffered are forwarded in attachment form; sent via email by the president of the Council of Human Rights Rapporteurs in Cuba, Juan Carlos Gonzalez Leiva.
For further information:
JUAN CARLOS GONZALEZ LEIVA
Tel: + 5352730968 / + 533322225
Email: relatorescubanos@gmail.com
LAIDA A. CARRO
Human Rights Defender
Coalition of Cuban-American WomenEmail: Joseito76@aol.com