It's time to talk to Cuba? 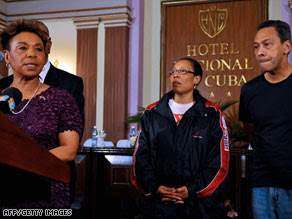 
“It’s time to talk to Cuba” these are the words which Rep. Babara Lee’s used to address the media she and her colleagues made after their visit with the Castro regime in Havana. As you know, she was in Cuba with the CBC (the Congressional Black Caucus) Read Here and More Here. I can show you how these specific individuals are and always have been working with the Castro regime in secrecy for decades, especially in the Communist indoctrination department. But, I will spare them and concentrate on that particular sentence, “It’s time to talk to Cuba.” Just this statement on its own is a literal crime because it could not be any more wrong and more contradictory. With this sentence, “It’s time to talk to Cuba”, I could actually write a book and title it, as is.

It’s time, sure it’s time! Fifty years, that’s how long Cubans in Cuba have not been able to communicate with the world. It’s not just the US, they cannot communicate with anyone outside of the country. You might be able to call them on the phone. This would be expensive but money is no object when you need to talk to a family member. Let’s not forget “Big Brother” listening on the other end please. Nevertheless, a conversation of this kind with a family member would only produce an enormous list consisting of articles of clothing, food items and medicinal remedies. In that respect, Cubans can communicate their needs because the exuberant taxes accompanying the delivery of these essentials are collected by the ones who deprive them of these needs in the first place, the Castro regime. It is also necessary to be able to visit any of our family members in Cuba and at anytime, who are in very poor health and are either not a political prisoner or have unjustly and inhumanly been placed in Cuba’s Gulag. The later one is the main issue, because as an act of further embarrassment and mind torture, the love ones who wish to visit these noble individuals, inside and outside of Cuba are not allowed to, the Castro regime does not allow them and do not permit these outsiders to obtain a visa to enter their own country.

There are other problematic communication issues and they are very evident, when anyone would attempt to mingle with Cubans who want to leave (escape) Cuba and their opinions are considered as a newsworthy item. A normal and ordinary chat with a news reporter from a foreign country, one who let’s say, would like to find out how the living conditions in Cuba really are. Or in the case when a news reporter would raise a question about human right conditions on the island, there, you will run into a stone wall. The repercussions and the punishment that accompany these illegal acts of expression are very severe, to the individual and their immediate family members.

Yes, it sure is time for all Cubans on the island to communicate with America and to have the freedom to travel outside of the island as a migrant or as a tourist. Isn’t this the main reason why this meeting was organized? So the American tourist would be able to freely travel and visit the beautiful island of Cuba. But wait a minute, this is a one way deal, you see, the Cuban citizen would not be able to do the same. ‘It’s time to talk to Cuba”, they say. Hey, I want to talk to Cubans in Cuba, me, yes me, I was born there, why can’t I talk to Cubans, why can’t I freely travel to Cuba, talk to Cubans in Cuba, in person and have a conversation with them in a public forum, where all involved would be able to criticize the Castro regime. We all know what the consequences concerning that discussion would be. We would all be thrown in jail, tourist and all. It’s time to talk to Cuba?

“It’s time to talk to Cuba”, yes they did, these leftist communist loving CBC members casually traveled and talked to there Cuba. And there Cuba is the Castro regime, the reason why Cuba is in shambles. Well, what did they talk about, no one really knows because they had a private meeting but according to them and only them, the Castro regime is willing to lift the travel restrictions. Also, according to them, Cuba is a free country and its citizens are allowed to do as they like. So, “It’s time to talk to Cuba”, they say. Cuba has 11 million inhabitants and they go to talk to their slave masters. The Cubans I would talk to are the ones who struggle and spend everyday trying to figure out what they are going to eat the next day. The ones that are deprived of turning on a computer and communicating with the world, the ones that cannot stand on the corner and demonstrate against the Castro regime, these are the real Cubans. Why don’t they talk to them? That’s Cuba to me but the Castro regime who never officially were elected as leaders, that’s the CBC’s definition of Cuba, that’s there Cuba and certainly not mine.

Dont you think it is time for Cuba to talk to USA?
Cuba, get USA as a enemy flag to do all kine of crimes. Cuba put the world close to a nuclear war during the cool war, Cuba has being and enemy of USA. It is time to Cuba to apology to USA and to the entire hemisphere. USA do not have to talk to Cuba, is Cuba the one ho have to talk to USA.