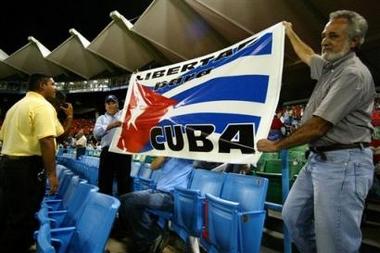 Puerto Rican officials have the courage and know the meaning of FREEDOM OF EXPRESSION. From the Real Cuba:

Here is what Puerto Rico Police Superintendent Pedro Toledo told the Miami Herald: ''I am in agreement with
freedom of expression; I am not in agreement with taking away people's posters,'' he said. ``In Puerto Rico,
anyone who wants to hold up a sign is free to do so. Here we have a guaranteed right to express ourselves.''
Col. Adalberto Mercado of the San Juan city police said that although baseball had the right to enforce its
existing rules, his officers will not step in either, leaving it to private security personnel hired by Major
League Baseball and the promoter, MB Sports, to enforce the conduct code.''From our standpoint, having a sign is not a crime here. In fact, it is a protected constitutional right,'' he
said. ``I explained to the Cubans that this is a constitutional right, a law. They know it's a law of the United
States but were denouncing the lack of enforcement of Major League rules.''

Now Bud Selig and MLB have banned posters with any political message in obvious appeasement to the dictator. Mr. Selig, show us the law that you can not have any signs with freedom expressions or of that nature? Mr. Selig again you take the side of the dictator, rather than Americans of Cuban descent.!!!