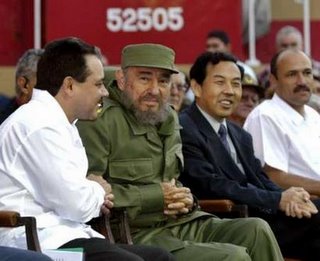 By Anthony Boadle, HAVANA: China became Cuba's second-largest trading partner after Venezuela in 2005, but Chinese companies worry about collecting payment for their increasing sales of durable goods to the island, a Chinese diplomat said on Friday. A $500 million Chinese investment in Cuba's nickel industry, announced more than a year ago, is still under negotiation, China's commercial counselor in Havana, Yang Shidi, said. China's growing influence on the Cuban economy is evident on the streets and in the shops, where Chinese goods such as toys, clothes and sports equipment have replaced imports from other countries. Spanking new air-conditioned buses made by China's Yutong Bus Co., the first of 1,000 sold to Cuba, make a sharp contrast with the vintage American cars still motoring along Cuban streets. Young Chinese business executives have become a familiar sight at Havana's hotels and airport as the Communist-run allies strengthen their economic ties. China is selling Cuba television sets, electric cookers, rice steamers and light bulbs. Cuba wants to buy 1 million Chinese refrigerators as part of its energy-saving plan to replace decades-old household appliances. Twelve diesel locomotives arrived by ship from China a week ago to upgrade Cuba's railway system. ''Two-way trade has reached record levels and we hope it will continue to expand steadily,'' Yang said in an interview. Chinese exports to Cuba grew 95 per cent in the first 10 months of 2005 to over $500 million, while imports grew 17 per cent to $200 million, he said. Cuban officials said total trade between the two countries reached $1 billion last year and China rose from fourth to second place among Cuba's most important trading partners, displacing Spain and Canada. The sales to Cuba are financed with millions of dollars in credits extended largely by the exporting companies themselves, more than the Chinese government, Yang said. ''China is a market economy and the companies take their own decisions and risks. ... The worry the companies have is how they will get paid for the growing sales,'' he said. Cuban sales to China are mainly sugar, a declining industry. ''The Chinese give a lot of credit quickly, but they are very cautious when it comes to investing,'' a Cuban economist said. China's state-owned Minmetals Corp. agreed last year to form a joint venture to produce ferro-nickel at a plant abandoned when the Soviet Union collapsed. The $500 million project would produce 68,000 tonnes of ferro-nickel a year beginning in 2007-2008, but plans have reportedly been delayed.

What a deal for the Chinese government. Chinese businesses pick up the tab for squatters rights a hundred miles from Miami. I'd love to know exactly what castro gave them.

Is Castro going to do the same thing he did to Argentina and other countries on paying the credit extended? Hmmmm!!!

China is an enemy of the U.S.of A.
Well, if you consider the Chinese money given both to Clinton and Al Bore it's enought to indict them for treason, for accepting money from an enemy power. At least in sheer numbers of armed men, China is a military power, and according to their military doctrine of the "big wave of men" they can fight pretty successfully against a more high tech army. That'd be done at a high cost, but we would be relieving them from the need of feeding a million plus people if such a battle is ever fought -and that's great news for them- and they still would be at full operational capacity. And what are we doing? They are setting shop in Havana and we are stretched thin in other places.