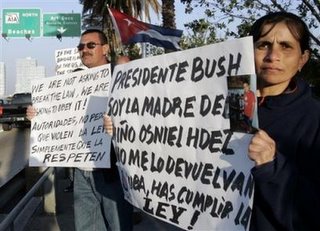 This is the mother of one of the balseros. She is basically asking: "President Bush I'm the mother of the child Osniel Hernandez Don't return him to Cuba Apply the Law." Remember these 15 balseros were picked up on a bridge near Marathon Key. Before I get e-mails stating what is the law and that they should be sent back, the law clearly states if they reach land, they can stay. They were found on a bridge and that clearly constitutes land. I guess the law or no law applies to Cubans only. Where are all the so called hispanics groups, immigration activist, and those who continually spout "undocumented?" Even on Spanish television the term that they are using on these Cubans: "illegal"
Posted by Alfredo at 6:37 PM