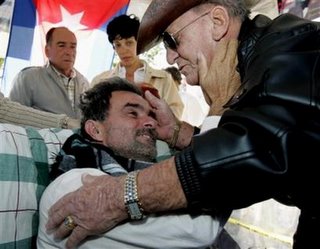 Mr. Ramon Saul Sanchez is in grave condition due to his hunger strike. He is literally putting his life on the line concerning the wet foot-dry foot policy. It's time to do something folks! Net For Cuba has a press release and urges letters to the White House and Homeland Security:


FOR IMMEDIATE RELEASE
Ramón Saul Sánchez, Leader of the Democracy Movement, Between Life and Death

Miami, January 14, 2005-Exiled activist Ramon Saul Sanchez, leader of the Democracy Movement, continues on a hunger strike, which he began on Saturday, January 7. Sanchez, who spent a week at Downtown Miami’s Freedom Tower, has vowed not to end his hunger strike until representatives of the Cuban exile community are granted a meeting with representatives of U.S. Citizenship and Immigration Services (USCIS), the branch of the U.S. Department of Homeland Security, to talk about Cuban immigration policy, in particular about the wet foot-dry foot policy. As of noon on Saturday, January 14, Mr. Sanchez has been at the Torch of Freedom, on 8th Street and 13th Avenue in Little Havana.Mr. Sanchez is in a poor state of health. His blood pressure is very low, and his overall situation is going from bad to worse. Many who are by Mr. Sanchez’s side made the same comment: “his state is quickly deteriorating”. Mr. Sanchez himself declared to those present at a meeting on Friday, January 13th that, should he be hospitalized, he does not to be given and iv.The strike began following the detention and repatriation of 15 Cuban rafters who had reached the old Seven Mile Bridge in the Florida Keys. The repatriation has caused indignation in the Cuban exile community, which asks the U.S. government to revise its immigration policy towards Cuba.Jovenes por una Cuba Libre encourages everyone to visit Ramon Saul Sanchez and show their support by stopping by the Torch of Freedom, 8th Street and 13th Avenue, S.W. At the site there is a book of signatures, where all those who wish to do so may write messages of support. Those who cannot sign the book in person may send an email with their name, city, and message to jcubalibre2004@yahoo.com It is also important for everyone to call or write to: