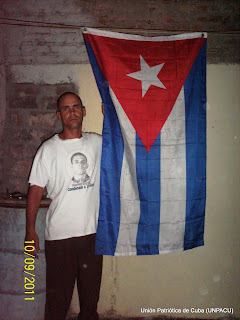 Cuban human rights defender, Wilman Villar Mendoza, who had been admitted in critical state to the Juan Bruno Zayas Hospital in Santiago de Cuba on January 14 following a 50 day hunger strike (begun November 25, 2012), died on the evening of Thursday, January 18, 2012 of a multiple organ failure and a generalized sepsis.


Wilman Villar Mendoza, who was 31 years old and a member of the human rights group UMPACU (Union Patriotica de Cuba) began a hunger strike in the Prison of Aguadores on November 25, 2011 to protest the false accusations that led to his unjust incarceration and to demand his unconditional freedom. Wilmar was beaten and arrested following a public peaceful protest in the eastern town of Contramaestre on November 14, 2011, and sentenced in a trial he called a “judicial farce” to four years in prison. He was charged with “refusing to obey an official” (desacato), “resistance” (resistencia), and “assault” (atentado).


As most members of the peaceful resistance movement in the island, Jose Daniel Ferrer Garcia, leader of UMPACU, holds the Cuban government directly responsible for the demise of this peaceful human rights defender. Numerous activists across Cuba declared themselves in mourning and said this sad event unites them even more to continue defending the cause of human rights in Cuba.

The death of Wilman Villar Mendoza did not come about fortuitously nor is it an isolated case. The same terror tactics of mental and physical torture to subdue a political prisoner that have been systematically applied in Cuban prisons and which were applied to Orlando Zapata Tamayo, (who died on February 23, 2010 following a prolonged hunger strike) were also practiced on Wilman:

· Accused of being a common criminal

· Isolated in a humid punishment cell

· Deprived of water and medical assistance

Wilmar’s widow, Maritza Pelegrino Cabrales, who is a “Lady in White”, is presently being denied access to her husband’s body and the Cuban government has unleashed a wave of repression throughout Cuba as members of the peaceful resistance movement are trying to pay their last respects to their compatriot. The Juan Bruno Zayas Hospital is surrounded by military guards. Liudmila Rodriguez Palomo reported that State Security agents in patrol cars, carrying sticks and stones, violently arrested activists in the Eastern city of Palma Soriano. The house of Jorge Luis Garcia Perez Antunez and his wife, Yris Tamara Perez Aguilera in the Central city of Placetas is surrounded by State Security agents.

For months, the Coalition of Cuban-American Women has been alerting the international community that the lives of those human rights defenders who are publicly struggling on behalf of fundamental freedoms in Cuba are in danger. We urgently call on religious, civic, political and cultural entities and its leaders, as well as the media and the non-governmental human rights organizations worldwide, to recognize and display their solidarity on behalf of these men and women who are sacrificing their lives for the cause of human rights in Cuba.