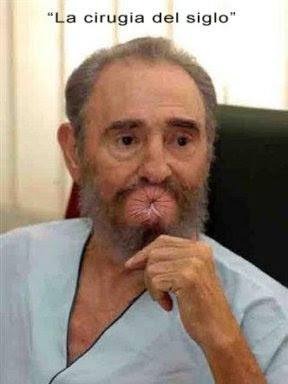 My FREEDOM loving brethren it's time for another caption contest! El Cafe Cubano could not resist using this picture and I can't wait for the comments! Be creative and don't hold back. I will throw in a FREE Guayabera or t-shirt donated by SOROA Enterprises for the best caption! Very creative comments last week, but I have not picked a winner for last caption contest.
Please read below for rules and regulations:
***In pursuant of the by laws of the El Cafe Cubano caption contest, this contest is open to all in the general public except for Fidelito, those affiliated with the communist party, clueless journalist who constantly defend the dictatorship, Code Pink, Jose Serano, Danny Glover, Charles Rangel, Katie Couric, CNN in Havana, people who wear Che t-shirts, ramiro"cuidado que to voy a dar un tiro," Dan Rather, Oliver Stone, Harry Belafonte, that guy who helped with the Cuba search engine, Pastors for Dictators, and all those who defend the apartheid dictatorship.
Disclaimer*****
-El Café Cubano is not running for political office here in the U.S. or Cuba.
-El Café Cubano is a blog that is run independently and not paid by the U.S. government
-El Café Cubano is not a member of any mafia organizations.
-El Café Cubano is not a member of any exile organizations
-El Café Cubano is not located in Miami, but in the great state of Texas!
-El Café Cubano has repeatedly been attacked by viruses, yet my only weapon is that of words and the truth.
Posted by Alfredo at 7:32 AM

El Café Cubano is not located in Miami, but in the great state of Texas!

What the hell is wrong with Miami?

nothing? I love Miami!! Just pointing out the ignorance and stupidity of the lefties labeling everyone "Miami Mafia" no matter where you are from. We all know who the real "mafia" are and what they have done.
We all are brothers against the brutal apatheid dictatorship, Miami, Italy, New York, LA, and this dawg from Texas we all are together.

cubans the most intolerant of all ethnic groups? No, we take all the cheap shots from everyone and because we stand up and defend ourselves, we are labeled all kinds of names.

What nationality are you? jealous because Cubans kick ass in everything that they do?

Go sell this nonsense somewhere else.. pleaes fidelito or new monitor go visit another site and be brave don't mask your IP. What are you afaid of?

Guys I usually don't go off like this, but I m tired of all this nonsense!!!!!!

Alfredo don't get caught up in this Miami- Texas, thing that is childish and you never have said anythings wong with Miami. You never said there was anything wrong with Miami. Oh Brother. Oh aa to the anaticubana anonymous-FU!

Alfredo ve preparando my second guayabera. This caption is all mine

Correction above -Oh and to the anti-cuban anonymous above- FU! Youre pobably living in one of my families old houses in Cuba stlen by the rob-olutionists. So go get in your fcking ration line and shut up asswipe.

Texas does it better

correction above- stolen not stlen.

Caption contest-
Get your ass out of your head!

Alfedo you dont have to explain yourself.Dont get caught up in that childish nonsense.

alfredo someone is jealous that you have more comments on your blog than his. LOL

lol yup jealous what a way to start a monday morning.

I really want to see who ca dear to topple may caption comment ..

If found that person should get two guayaberas

oh I forgot my caption;

"forget frometa that Texas cuban mafia kicked my ass all the way up to my face!"

Honey,can you get some toilet paper,I need to wipe my mouth!

anonimos makes sure you identify yourselves ... How can you expect to claim your prize...I meant second prize ( T shirt)

Its not about prizes ;)

raul, time to wipe my ass!

uncle fester please get carlos santana to clean my ass!

Get your ass out of my face!

What kind of Fish is that?

Now I can literally talk out of my Ass!

Why does it smell like shit here? lol because your ass is beneath your nose!

please give me a big french kiss

Please no personal attacks concerning other bloggers. We are in this together. If you have a difference, please e-mail or talk to that person directly. The enemy wants division and personal attacks, so please let's aim our attacks towards the communist apartheid dictatorship.
Let's stick together mis hermanos!!!!

"This is what free health care gets me? IT SUCKS!!"

"La China went to China and all I got was my new artifical anus ... from an Orangutan!"

"To be able to bear provocation is an argument of great reason, and to forgive it of a great mind."~ John Tillotson

I'd like some cream cheese and jelly for this bagel please

They told me I was getting Tosilectomy and I ended up getting a Culo-Bocatomy. Hey, but it was FREE!

Do I get Ice Cream with that?

Not only can I do Dicatorcizes I can swallow an entire sausage. :P

Not only can I do Dictatorcizes I can swallow an entire Sausage!